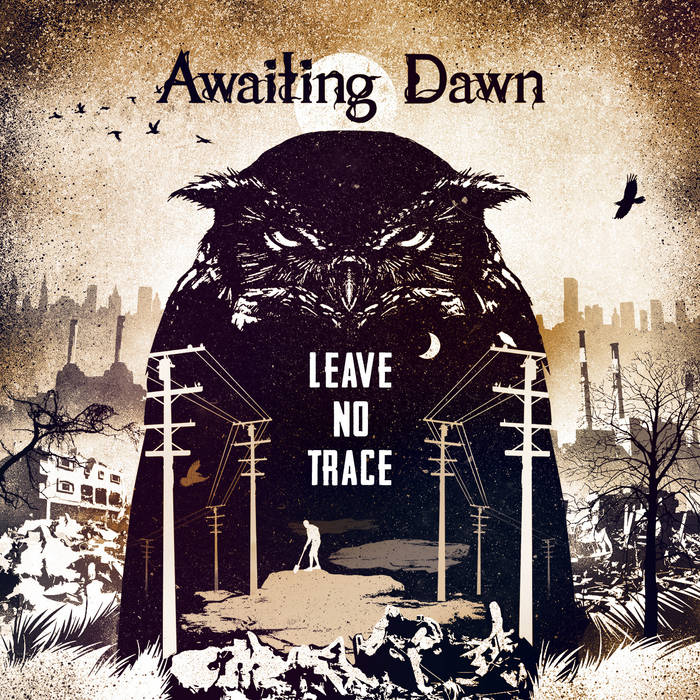 LEAVE NO TRACE is the first full-length album of german Progressive Metallers AWAITING DAWN, who independently released an EP, entitled “Changing Days” in 2009.
The band, which was formed in 2006, developed their specific style over many years. It is defined through complex structures, meters and rhythms, as well as a big dynamic range, though always preserving an understandable songstructure. Influences of Classical Music and Jazz to the songwriting present themselves in motific, formal and harmonic perspectives. A clear and sometimes rapsy voice within melancholic melodies is another typical feature – as a difference to many metal stereotypes almost with a trace of pop-qualified melodics and differentiated expressions in a range between soft and rather aggressive sounds, appearing moreover in the unusual many calm passages (as measured by most metal bands).
The basic theme of most of the songs is an introverted and introspective look to emotions which is brought to a poetic statement through lyrics with great depth, here and there going together with a dash of social criticism.
The recording period for new album endured almost a year, in which every song was revised and perfected until the last detail. The album contains eight songs which somehow stand for the band’s history and the best material which was written during the years. Musical, thematical and lyrical references between all of the songs deliver the overall impression of an integral work, while at the same time preserving as much variety as possible.
„Leave No Trace“, being an introverted expression for individual insecurity, operates as a summary of all the different emotional facets of the album.
Special features amongst others on the LP are:
An authentic church organ, authentic string instruments from guest musicians, guest background vocals and group shoutings with different guests.

Awaiting Dawn wishes to thank all of our supporters, family and people
who helped us along our way and in realizing this record.
Special thanks to Markus Teske, Simon Walter, Stefan Groh, Mark Merritt
Very special thanks to Nils Biesewig, Laura Cromm, Annette Schneider,
Fabian Steeg.
To Christophe Maaß for your dedication and awesome work;
to Matthias Platz for years of common time, co-development of the band
and a lot of creative input!

Fresh Progressive Metal/Rock from Germany in an exciting mixture:
Sometimes very heavy and powerful, sometimes rather calm, thoughtful and dreamy - always innovative and full of emotions, honesty and affecting melancholy.
All this embedded in a frame of progressive and virtuosic instrumental parts with lots of groove meeting catchy vocals between introverted sensibilty and extroverted aggression. ... more

Bandcamp Daily  your guide to the world of Bandcamp